Take the guesswork out of keto

Over 40 delicious recipes to support the keto meal plan 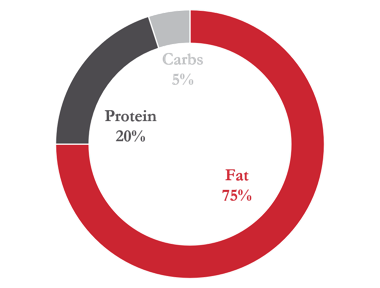 KETO IS A HIGH FAT, LOW-CARB DIET THAT TEACHES YOUR BODY TO BURN FAT FOR ENERGY

Eating only moderate amounts of protein, minimal amounts of carbs, and increasing your fat intake allows your body to enter and remain in this powerful fat-burning mode, known as ketosis.

Advice from our Keto Experts and Nutritionist

Store-bought foods, particularly condiments and sauces (such as barbeque sauce, relish, salad dressing, mustard, mayo and even hot sauce), have hidden sugars and carbs, so always check the ingredient list and nutrition info. And when in doubt about an ingredient, Google it.

While sugar is a no-no, you can still sweeten things up with these options, in moderation: Stevia, yacon syrup, erythritol, sucralose, xylitol and monk fruit sweetener. Just pay attention to the nutrition information so you know exactly what you’re getting into carb-wise.

Get plenty of electrolytes

By design, ketosis which triggers our kidneys to let go of more electrolytes than normal. Headaches, muscle cramps and fatigue are all signs this is happening. Combat this by getting plenty of electrolytes—particularly salt (sodium), magnesium and potassium. Keto specialty supplements (such as BHB) can help as well.

Thousands of People Have Experienced The Following Benefits of Keto*

READY TO BOOST YOUR KETO SUCCESS?

If you are new to keto, one thing you may find is that it can be hard to get enough fat in your keto diet. That's where supplements can help. Keto meal replacement shakes make it easy to get into ketosis. They help you get in all of your fat for the day, while avoiding carbs you might otherwise eat in a typical meal. Our BHB supplement replenishes your electrolytes and keeps you from feeling sluggish, helping your body smoothly transition from sugar-burning to fat-burning. And our affordable "Fuel your Best Sample" pack includes single servings of both for you to try.

Get your sample pack TODAY!

The Keto Diet Has Been Featured In

Do I have use supplements to do the keto diet?

No. However, once you’re on a keto diet, you'll quickly learn it can be challenging to get enough fat in your diet. It can also be difficult to prepare and eat only keto-friendly foods with a busy lifestyle. That's where keto meal replacement shakes and BHB (Beta-Hydroxybutyrate) can help. Keto meal replacement shakes make it easy to get into ketosis. They help you get in all of your fat for the day, while avoiding carbs you might otherwise eat in a typical meal. BHB replenishes your electrolytes and keeps you from feeling sluggish, helping your body smoothly transition from sugar-burning to fat-burning.

How does the Keto diet compare to Whole30?

The Whole30 diet is basically a more restrictive version of Paleo. It’s a 30-day elimination diet that is better described as a nutrition reset than a weight loss strategy.

Created in 2009, Whole30 cuts out sugar, grains, legumes, and dairy. It also bans natural and artificial sweeteners (including honey and maple syrup allowed on Paleo), alcohol, all baked goods, and junk food. Like Paleo, it focuses on whole, fresh foods like fruits and vegetables, including starchy ones, which are banned on Keto. But unlike Paleo, Whole30 stays away from all packaged foods and recipes that mimic foods e.g. Paleo Pancakes. After the 30 days, you’re directed to slowly reintroduce food groups in an effort to pinpoint any foods or ingredients that may be causing certain issues, such as bloating, stomach discomfort, and acne.

Unlike Keto, Whole30 does not provide guidelines on macros. It doesn’t specify what your fat, protein, and carb ratios should be, but instead specifies which types of foods you can eat. Due to the elimination of grain and legumes, Whole30 is low-carb, but it’s not as low-carb as Keto is.

Weight loss isn’t a primary goal of Whole30, but due to the severe restriction on what you can eat during the 30 days, it’s common to lose weight. It’s also common to gain the weight back when you reintroduce your body to your regular diet.

Can I have alcohol on the keto diet?

While it’s best to abstain while on keto, it’s not an absolute must. If you do find yourself wanting an adult beverage, stick with just one and choose a keto-friendly option:

• Hard liquor (including rum, vodka, whiskey, gin and tequila) has no carbs. Drink 1.5 oz. straight or with a low-carb mixer.

• Light beer. A 12 oz. serving typically has 3 grams of carbs

Remember, though that even keto-friendly alcoholic beverages still contain “empty calories” that your body will prioritize burning before any other macronutrient. Also, your liver has the big job of converting fatty ccids into ketones to send to all the cells in your body for energy and when it is busy detoxifying and clearing the body of alcohol, it takes a break from being an efficient ketone making machine. It’s a good rule
of thumb to limit any alcohol to 1-2 drinks within a 6 hour period of time.

And remember: many on the keto diet experience a dramatically decreased alcohol tolerance. Take it slow and drink plenty of water when consuming alcohol.

How does the Keto diet compare to Paleo?

The Paleo diet is appealing because it doesn’t ask followers to worry about eating too much fat or to count calories. Furthermore, it’s based on biology. As the premise goes, our bodies have become dysregulated with the environment. That’s why we have skyrocketing rates of obesity and diabetes. Humans have existed for 200,000 years, but our current food supply — processed junk food — has only been around for about 50 years. Soft drinks, donuts, candy, potato chips, sugary cereals, and foot-long sandwiches are new. Paleo calls for returning to how our ancestors ate – meats and vegetables. Absolutely nothing processed and no refined sugars.

Also based on biology, specifically the biology of human metabolism, the Ketogenic diet (“Keto” for short) takes things a step further. Some people think of it as Paleo 2.0. Keto followers believe that most Paleo followers eat too many carbohydrates and not enough fat. A popular source of fat is full-fat dairy products such as butter, heavy whipping cream and cheese, which are not permitted on Paleo. Another main difference: Paleo avoids sugar substitutes and allows sweeteners such as honey and maple syrup, while Keto shuns all carb-filled sweeteners in favor of sugar-free substitutes, such as Stevia and erythritol.

Keto is all about getting into ketosis so your body is burning fat for fuel instead of sugar. Ketosis works on a spectrum. When you’re Paleo, you probably achieve ketosis from time to time – maybe for a few hours or a few days. But those living a Ketogenic lifestyle try to stay in ketosis for as long as possible — sometimes weeks or even months at a time. For many Keto followers, being in a state of ketosis improves both their physical and mental performance.

How is the keto diet different from other low-carb diets?

Keto is somewhat unique in that it encourages an even lower carb intake than most low-carb diets. Other diets might limit you to 100 grams of carbs, while keto restricts you to 20-30 grams of net carbs. Additionally, keto promotes very heavy fat consumption to foster ketosis, which isn’t a priority with other diets. The neat thing about keto is that you honestly don’t feel hungry all the time like with most other diets. That’s because of the awesome, filling macronutrients.

What are the benefits of using a keto diet plan?

Our free keto diet plan lays out an easy-to-follow formula to reach your health and lifestyle goals. The keto diet meal plan has 30 days' worth of breakfast, lunch, dinner, and snacks to help you map out your keto journey. The delicious recipes that come as part of the keto diet plan have been developed by our nutritionist and tested by our community of keto experts. We've designed it to be the keto diet plan for beginners, for experts, and everyone in between!